A Tour of Harden’s Taxidermy in Thomasville, GA 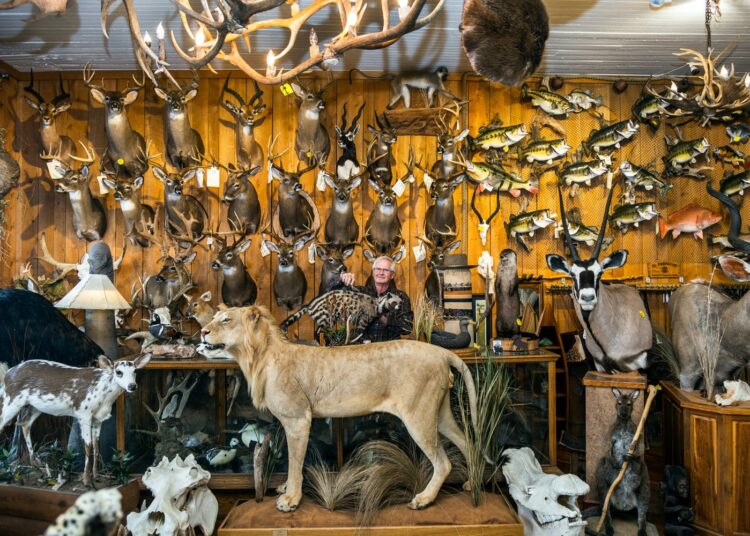 FROM HIS WORKSHOP in Thomasville, Georgia, Taxidermist Edward Harden has been stuffing everything from mourning doves to elephants for over 40 years. He got his start by sending away for a mail-order Northwestern School of Taxidermy course at age 12. At 15 he took his first paying customer. After that, Harden went to college for biology and opened the doors at his 128 East Jackson Street shop in 1980. Today, he is a master at his craft.

Harden takes on hundreds of shoulder mounts, fish mounts, and full-body mounts every year, and his customers wait in line for up to three years for bird mounts. But what’s most impressive about Harden’s Taxidermy is how he and his team have turned their storefront into a destination. The shop is like a tiny, one-room Museum of Natural History. Out front, a full-body bull elk welcomes you at the door. Once inside, you’ll see largemouth bass swimming on the wall, ocellated turkeys strutting on the floor, and baboons sitting atop glass display cases full of game and curiosities from the wild.

Last fall, we visited Harden’s shop for an afternoon to see how his small crew of craftspeople breathe life back into critters big and small. As a bonus, Harden also took us to one of his customer’s showrooms where he’s worked for years to create a one-of-a-kind display of African, European, and American game. Here’s some of the best of what we found.

Edward Harden brushes an African civet mount behind the counter in his Thomasville showroom. Though his shop is small, it doesn’t stop him from displaying ambitious mounts like the full-body piebald deer (left) and African lion (center).

Taxidermist Dallas Burns works on all of the whitetail deer mounts at Harden’s. Here he’s preparing a cape for a whitetail buck shoulder mount while another whitetail buck waits to have its antlers put on.

A wall of whitetail bucks awaiting customer pickup. Harden says that over the past two years, the amount of whitetail shoulder mounts he makes every year has doubled.

A collection of shoulder-mount forms sits on a pegboard wall in the back room at Harden’s. Pre-made forms are made of foam. They are designed to sit underneath the skin of a mount to give support and shape. Each form has a space cut out in the top of the head for a deer’s antlers.

Each of Harden’s employees takes on a specific job at his shop, and Harden handles the fish mounts. Here he’s setting the eyes and working on the final details of a largemouth bass.

A wall of finished fish mounts in Harden’s showroom waiting for customer pick-up. Harden uses an older technique that involves cast plaster to pose the stretched fish skin. He then paints them to look more lifelike.

Taxidermist Greg Owens works on rattlesnake belts. Harden’s shop is known for snake-skin belts and leather goods, which they ship all over the country.

These rows of prepped snake skins will be used for making belts and leather goods.

Harden stretches out a bear rug in his workshop. Along with full-body and shoulder mounts, Harden’s offers hide tanning to make rugs and throws.

Along with fish, Harden specializes in bird mounts like this dove. Because of their small size and extremely thin skin, doves are one of the most difficult animals to work on.

A glass display counter of ocellated turkey mounts. Harden spends up to five hours “grooming” a turkey mount before it’s finished. The process consists of adjusting every feather on the bird’s body to its correct position with a pair of tweezers.

This zebra and lion mount is part of a private collection at a customer’s home. Capturing the expressions on both animals’ faces for a mount like this is incredibly difficult. One wrong move and an animal can look overstyled or cartoonish.

Harden stands between the front legs of a giraffe he mounted in another view of his customer’s private collection. One of the pieces he’s most proud of is the alligator coming through the coffee table in the foreground.

An example of some of Harden’s best work, this crocodile taking a bite out of a boa constrictor seems to defy gravity.

Another view of Harden’s customer’s showroom. Full-sized bear mounts are one of the more challenging tasks for a taxidermist. Harden also spends hours building and sculpting the natural-looking bases the animals are standing on.

Harden positioned this tahr mount to look as though it’s climbing down a rocky slope. For taxidermy like this, Harden needs to create a form nearly from scratch. 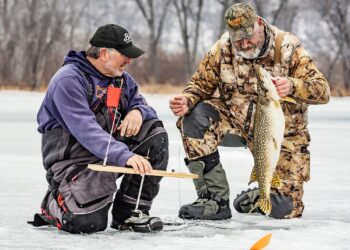 TrueTimber® Returns as Title Sponsor on the CJB Motorsports No. 5 World of Outlaws Sprint Car Piloted by Spencer Bayston