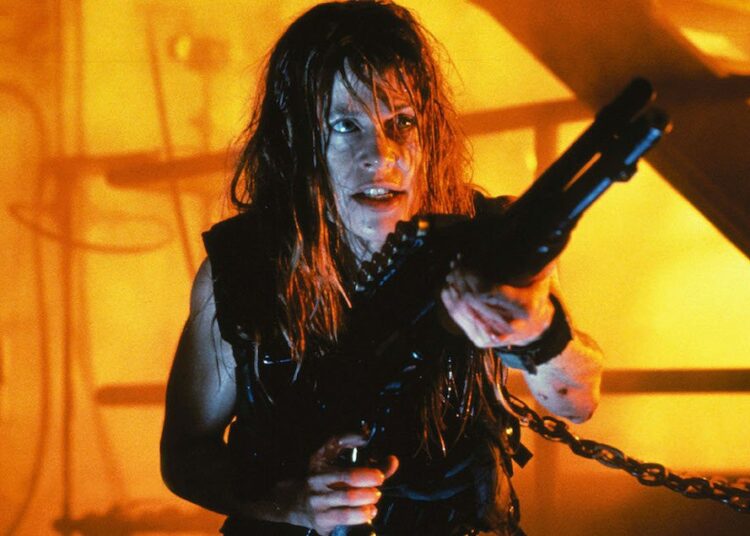 Terminator is one of the rare film franchises where the sequel was better than the original.

In Terminator 2: Judgement Day, we see the return of Arnold Schwarzenegger and Linda Hamilton. In the film, they try to protect a young John Connor and stop judgment day while dealing with a new, more lethal Terminator.

It’s easily one of the best action flicks ever made and one of my favorite movies of all time. It’s most certainly a sweet movie from the lens of a gun nut.

The armory in Mexico scene in particular shows off a healthy stockpile of firearms, including the M134 minigun.

Speaking of, this is the only movie where I’d believe it to be capable of handheld fire. A killer robot can certainly handle this beast. However, we are talking about something a little simpler…Linda Hamilton’s Remington 870.

In the first film, Kyle Reese utilizes a sawn-off Ithaca 37 shotgun as his weapon of choice.

That gun must have left an impression on Connor. The Terminator series, in general, tends to have an affection for shotguns, as we see throughout the film series.

Connor certainly does, as we see in this film and later in Dark Fate. Shotguns tend to pack a punch against the monstrous Terminators.

Sarah Connor’s Remington 870 comes in at the end of the film. After carjacking a SWAT van and subsequently wrecking it, Sarah wisely removes a Remington 870 from the rack.

This configuration wasn’t that uncommon for the time. The folding metal stock and full-length magazine were popular choices for police cruisers. It made the guns a bit more compact and easier to tote.

Remington began producing the 870 in 1950 and it’s a flagship firearm for the company. It’s been a fighting shotgun as well as a bird gun, a deer gun, and a whole lot more.

Remington designed the weapon to be more modern than shotguns in 1950 — guns like the Winchester 1897 and Model 12, Ithaca 37, and Remington’s own Model 31.

Though Remington’s Model 31 was a great gun it was expensive to produce. That changed with the 870, which used more modern production methods and could outperform the old Model 31.

One of the huge advantages of the Model 870 is the use of dual action bars. These prevent binding and ensure a very reliable pump action regardless of how hard and fast you work the weapon when stressed.

The 870 in Terminator 2 took the combat configuration. In the film, Connor does well with the gun, especially in her situation.

She’s wounded in the right arm but manages to keep fighting by improvising. She works the action with a single hand, out of necessity obviously, but it looks slick.

Slick, and guess what, every action movie after that copied Connor’s moves. She retrieves ammo from the stock and fires from the hip — rarely a useful way to fire a gun.

However, she’s superbly close to the Terminator, and with her wounded arm, she couldn’t necessarily shoulder the stock. Heck, she never even unfolds it.

From experience, I will say that metal folding stock stings with few powered buckshot or slugs. It’s not a super comfortable stock, offers no cheek weld, and just hurts.

It’s better than nothing, and Connor makes it work. She almost blasts the T-1000 into the hot liquid magma below but runs short by a single round.

Linda Hamilton kicks ass with the Remington, and it shows that she got some serious training.

Some behind-the-scenes features show her at the range learning how to effectively use the gun without the stock. It clearly shows that she trained because she has no fear of that shotgun.

T2 will remain one of my favorite movies, and the Remington 870 will be that gun that almost killed a Terminator…it just needed a little 40mm help.

What’s your favorite scene (or gun) from the Terminator series? Let us know below. For more Guns of Pop Culture, check out last week’s look into “Lone Wolf McQuade” & the Browning Auto 5. 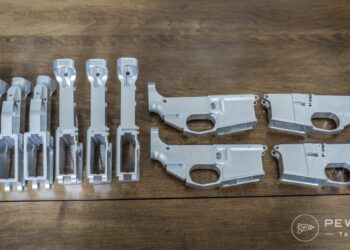 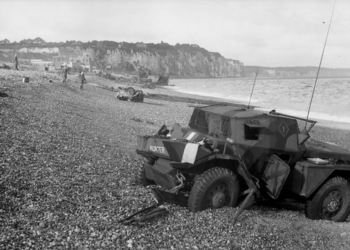 In this edition of A Picture From History, we’re going to be taking a look at one of the greatest...

https://www.youtube.com/watch?v=i8PQDZ3l0K4 Over the years we’ve seen many advancements in technology that have served us in our daily lives. Electronics get...

The 4th of July is a special time for America. A celebration not only of our nation’s formation but also a...