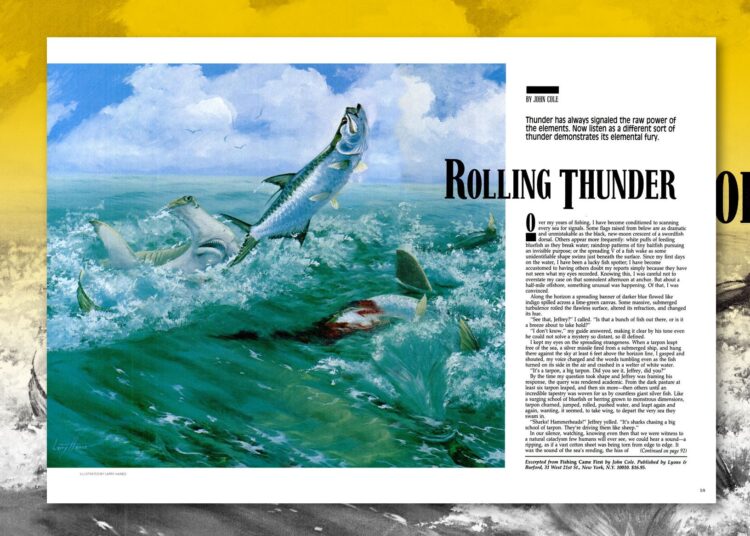 OVER MY YEARS of fishing, I have become conditioned to scanning every sea for signals. Some flags raised from below are as dramatic and unmistakable as the black, new-moon crescent of a swordfish dorsal. Others appear more frequently: white puffs of feeding bluefish as they break water; raindrop patterns of tiny baitfish pursuing an invisible purpose; or the spreading V of a fish wake as some unidentifiable shape swims just beneath the surface. Since my first days on the water, I have been a lucky fish spotter; I have become accustomed to having others doubt my reports simply because they have not seen what my eyes recorded. Knowing this, I was careful not to overstate my case on that somnolent afternoon at anchor. But about a half-mile offshore, something unusual was happening. Of that, I was convinced.

Along the horizon a spreading banner of darker blue flowed like indigo spilled across a lime-green canvas. Some massive, submerged turbulence roiled the flawless surface, altered its refraction, and changed its hue.

“See that, Jeffrey?” I called. “Is that a bunch of fish out there, or is it a breeze about to take hold?”

“I don’t know,” my guide answered, making it clear by his tone even he could not solve a mystery so distant, so ill defined.

I kept my eyes on the spreading strangeness. When a tarpon leapt free of the sea, a silver missile fired from a submerged ship, and hung there against the sky at least 6 feet above the horizon line, I gasped and shouted, my voice charged and the words tumbling even as the fish turned on its side in the air and crashed in a welter of white water.

By the time my question took shape and Jeffrey was framing his response, the query was rendered academic. From the dark pasture at least six tarpon leaped, and then six more—then others until an incredible tapestry was woven for us by countless giant silver fish. Like a surging school of bluefish or herring grown to monstrous dimensions, tarpon churned, jumped, rolled, pushed water, and leapt again and again, wanting, it seemed, to take wing, to depart the very sea they swam in.

In our silence, watching, knowing even then that we were witness to a natural cataclysm few humans will ever see, we could hear a sound—a ripping, as if a vast cotton sheet was being torn from edge to edge. It was the sound of the sea’s rending, the hiss of panic as hundreds of tarpon swam at their ultimate and desperate speed. As we watched and listened, the sound acquired new tones, more depth, until it became close to a roar, more like a waterfall’s cascade than fabric pulled asunder.

Thrashing, pounding their tails convulsively in the hysteria of their flight, the school of thousands of great tarpon flailed the still surface so violently that the liquid rumble filled the air around us with an awesome echo of distant, rolling thunder. Driven closer to us by still unseen sharks, the silver and indigo mass began changing color under its dapple of white water that marked each breaking fish. A copper-burnt-orange rose began blooming at the center of the violence, spreading its somber petals until they, too, were a piece of the whole.

“That’s blood,” Jeffrey said. “’Those fish are being torn to pieces.”

A new sound made its entrance, one I knew immediately, one every boatman knows: the sibilance of a breaking sea, a wave on the approach. But here? Here in a dead calm.

The wave rolled toward us with surprising speed. Perfectly formed, gleaming in the shimmering sunlight, it crested at almost 2 feet, lifted the Waterlight as it surged under and past us and crumpled into white water as it stumbled against the shallows of the flats. It was a wave born of apocalypse, a creation of fear, a signal of massacre and futile flight, an echo of the final energies expended by slaughtered tarpon and their relentless butchers.

Herding their silver sheep, the sharks pressed toward the Marquesas shoals, knowing their work would be quicker once the tarpon were forced against the flats.

A dark dorsal, curved and blunt, cut the water as I watched and understood I was seeing a shark, not a tarpon. I was stunned by its speed. Peering from pulpits off Montauk, I have watched many sharks move out of harm’s way. There was a certain languor to their departure, as if they understood the immensity of the depths at their disposal. And I have watched sharks cruising the flats and witnessed their strikes at hooked and wounded fish. But even then, these predators moved with deliberate speed, certain of their ultimate success.

This hammerhead was a projectile. A roostertail of white water flared from its dorsal as emphatically as it would from a high-speed outboard. The massive shadow shape beneath raced across the bleached flats like a shaft of dark light. I could not absorb the concept; the notion that a submerged creature that large could move so quickly stunned me. There could, I knew, be no defense, no evasion of such startling speed. A new standard of wild behavior had been set. I watched and knew I would judge the flight of every other fish by the shark etched in my memory.

Once pushed against the land, the tarpon scattered, followed by their pursuers. There was no longer a concentration of doom. Only the faltering copper rose still bloomed offshore to affirm the spectacle each of us knew had been ours alone, and would always be. We could, we knew, return to this place, to these Marquesas each May day for the rest of our lives and never witness such a spectacle again.

“Have you ever seen anything like that?” I asked Jeffrey.

Sitting quietly, more weary now than we were before we anchored for lunch, we waited for our adrenalin rush to subside. It seemed almost surreal to be so taut in what is thought to be a torpid climate.

Within a half-hour, however, we had revived and chattered easily about the spectacle and the tarpon’s migratory mysteries.

“Can I slip overboard for a swim?” she asked Jeffrey, and then explained. “All those fluids you made sure we drank are beginning to get to me. I’ll just hang on to the boat and do what I have to do, okay?”

“Sure fine. Do what you need to do, Jane. We’ll make sure you get back aboard.”

Jane stood, her mouth set firmly in that line of determination I know so well, sweat beading on her forehead above her large, brown eyes. I watched to see just how she would, in her late middle age, trim though she might be, negotiate her entrance to the waters of this Marquesas lagoon.

“John,” she said to me, in a tone I also know well, “you don’t have to watch my every move. Isn’t there something else you can do?”

As I turned toward the bow, Jeffrey said, “You might want to wait a minute or two, Jane, before you go over. Look there, about 6 o’clock, coming toward the stern.”

Following the line set by Jeffrey’s extended arm we each looked toward the eastern edge of our coral-dish anchorage. There, outlined in dark and dramatic silhouette against the white sand was the distinctive profile of a large hammerhead moving directly toward the Waterlight. This fish was in no hurry. Quite the opposite. Apparently assured of its complete command of any situation, the shark took possession of the small lagoon. With sinuous, lazy motions as fluid as the currents it moved through, the hammerhead continued its sensual and silent advance until it was directly under our boat. “God, isn’t it beautiful,” Jeffrey said in a half-whisper.

I judged the shark to be a foot longer than our flats skiff, which made it at least an 18-foot hammerhead, by far the most magnificent and terrifying I have ever seen. Its nearness was even more exceptional. In the sun’s glare, I could see each of its luminous, green eyes at each end of the odd airfoil protuberances that extended from its snout. An oddity familiar to saltwater fishermen, the hammerhead’s profile had sometimes seemed clumsy to me, a kind of genetic flaw, a handicap. But looking down at that fish less than 4 feet from us in water as clear as if it were distilled, the hammerhead’s most distinctive feature seemed more awesome than awkward, fitting, not freakish.

Hesitating a moment in the darkness of the Waterlight‘s shadow, the shark appeared to be deliberating its immediate choices. None of us made a sound. Then, with a subtle movement of its sweeping tail, the hammerhead glided across the lagoon onto the flats where we could see its dorsal above water and then back into the channel farther west where it vanished in the darker, deeper unknowns.

Jane spoke first. “Jeffrey,” she asked, “have you got a can, or a bucket or something I can use?” 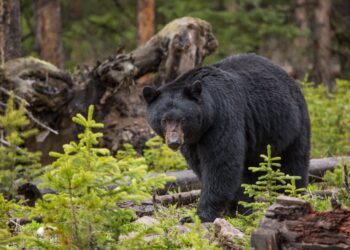